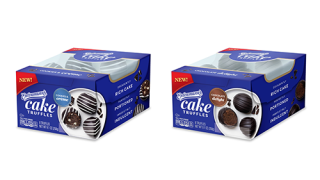 Entenmann’s is continuing to grow its portfolio of sweet treats with its new Cake Truffles collection.

Available in Chocolate Delight and Cookies and Crème flavors, the Cake Truffles come in boxes of eight with two truffles individually wrapped per tray for freshness, the Islandia, N.Y.-based company said.

“At Entenmann’s, we believe there’s no need to wait for a special occasion when you can celebrate every day by enjoying new Entenmann’s Cake Truffles,” said Catherine Danielowich, senior brand manager. “We’re thrilled to announce the latest release of Entenmann’s Cake Truffles, as we know our fans deserve to take a break from the mundane and treat themselves with these irresistibly indulgent treasures.”

Entenmann’s Cake Truffles are available for purchase at select retailers across the nation. 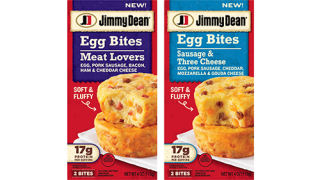 Jimmy Dean is putting its own twist on a breakfast staple with its Egg Bites line.

The fully cooked bites, which contain fluffy whole eggs and Jimmy Dean sausage or bacon, also are made with real cheese and baked, the company said.

“Breakfast is crucial to get your day started with your best foot forward, but we know it can feel daunting to make a meal from scratch — especially during the week,” said Janee Luhrsen, brand manager of Jimmy Dean brand. “That’s why Egg Bites are a great option! No prep time or clean-up, just flavorful, filling, and portable, so you don't have to sacrifice a delicious breakfast on even the busiest of mornings.”

Featuring 17 g of protein per serving, the bites are available in meat lovers and sausage and three cheese varieties, which can be found in the frozen aisle breakfast aisle of Walmart stores nationwide for the suggested retail price of $2.99. 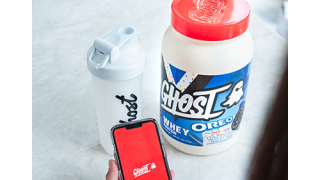 The Pittsburgh-based company teamed up with Mondelēz on the launch of Ghost Whey x Oreo Birthday Cake flavor, which will be available exclusively at GNC stores nationwide and online.

“After the launch of Ghost Legend All Out earlier this month we’re excited to introduce Ghost Whey x Oreo Birthday Cake as our latest flavor drop,” said Kevin Maloberti, vice president of merchandising at GNC. “Ghost continues to challenge themselves to innovate and create flavors, like Oreo Birthday Cake, consumers immediately gravitate to while also producing results.”

“GNC has always been a great support to Ghost, and we are honored to have a second exclusive retail launch with them this month,” said Dan Lourenco, co-founder and CEO of Ghost. “We only partner with brands and flavors that are authentic to who we are. At the same time of OREO’s 110th anniversary, we celebrated our sixth birthday, and what better way to make the occasion than with birthday cake? We hope every workout feels like a piece of cake with Ghost by your side.” 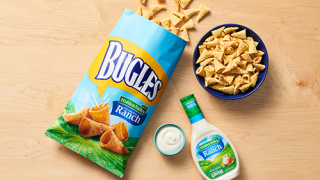 There’s a brand new Bugles ready to shake up the snack aisle.

General Mills announced that it is bringing the popular flavors of ranch to the salty snack with the Hidden Valley Ranch Flavored Bugles.

“We’re always looking for new flavors to excite our fans and make the Bugles they know and love even better,” said Stephanie Lensing, brand experience manager at General Mills. “Hidden Valley Ranch is the perfect partner to enhance the crunch of Bugles with the tangy ranch goodness only they can deliver.”

Featuring the bold flavors of Hidden Valley Ranch’s zesty herbs, it is coupled with the unique cone-shape of Bugles, the company said.

“Hidden Valley Ranch fans are always looking for new ways to enjoy the ranch flavor they love,” said Rachel Garrison, associate director at Hidden Valley Ranch. “What better way to offer something exciting than teaming up with the iconic Bugles brand for a delicious snack that’s also fun to eat!” 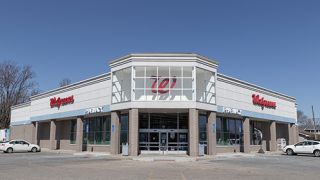 Walgreens is keeping an eye on a container recycling program that performed well at its Boots banner in the United Kingdom.

After a 50-store test that began in 2020, Boots last year rolled out the Recycle at Boots program to an additional 650 stores, allowing customers to return hard-to-recycle HBC items, such as toothpaste tubes and mascara containers. Customers are rewarded with 250 Boots Advantage Card Points for every five containers returned.

During the trial period, consumers dropped off more than 500,000 used HBC containers, the company said. “The reaction from our customers has been overwhelmingly positive,” said Lucy Reynolds, director of communications and CSR at Boots UK, in a post on the company’s website.

Boots sends the used containers to its recycling partner, MYGroup, which sorts them, shreds them and forms them into plastic boards, which are then used to create new items, such as chairs and reusable storage containers, some of which are now being used at Boots warehouses.

Lauren Stone, director of corporate social responsibility at Walgreens, said the pharmacy retail chain’s U.S. division is watching the results from its sister banner carefully, although she said it’s not yet clear if a similar program could work in the United States.

“We’re definitely taking learnings from the work they’re doing over at Boots,” she said. “It’s something we would love to do if we can operationalize it here in the U.S.” 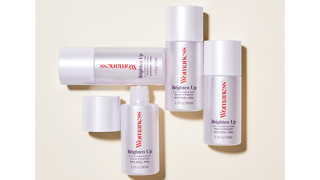 Womaness is continuing to address modern menopause solutions for women in their 40s and beyond with a brand-new skin care product.

Brighten Up, a 2-in-1 exfoliating toner is formulated with AHAs, BHAs and PHAs to help diminish dark spots, reduce wrinkles and improve the skin’s overall texture, the company said.

Other notable ingredients found in the product include lactic acid to aid in removing dead skin cells and Saccharum officinarum, a natural exfoliant that smooths and brightens the appearance of skin.

Currently, Brighten Up is available for purchase online for the suggested retail price of $24.99.