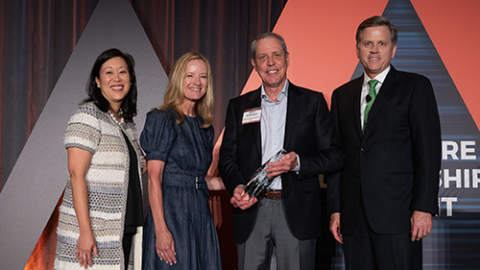 The award is the highest honor bestowed by the United States consumer healthcare industry and recognizes the outstanding work and contribution of individuals whose actions have created a lasting impact on the people and the affairs of the consumer healthcare sector, and directly improved self-care for consumers, the company said.

Named in honor of Ivan D. Combe, an industry pioneer and visionary who served on CHPA’s board of directors from 1958 until 2000, each year the award is presented to one deserving individual who, through a lifetime commitment to advancing consumer healthcare, has exhibited three notable attributes.

The three core attributes include professional excellence and a passion for improving the lives of healthcare consumers; outstanding leadership and involvement in industry activities; and a commitment to giving back to the community.

Downing has spent his entire career growing consumer healthcare companies of all shapes and sizes with a resume that includes sales and management at the Richards-Vicks Company; vice president of sales at Oral-B Labs; and head of North American consumer products at Rhone-Poulenc Rorer.

He also co-founded MedTech Labs — which eventually sold for a 400% rate of return — joined the board of directors at the Lansinoh Laboratories, became CEO of Insight Pharmaceuticals, then CEO of Clarion Brands which was recently sold to Bridges Consumer Healthcare.

“Over his amazing career, Gary has been described as ‘the ultimate boss’ and he has built strong, loyal teams,” Michelle Wang Goodridge, CHPA board chair and president of US Self Care at Johnson & Johnson Consumer said. “One former colleague noted that to be on Gary’s team, to have his confidence in you, and to be counted on by him, was the ultimate professional and personal reward.”

As Downing’s career advanced through different companies and roles, he also remained an active and dedicated member of CHPA for 38 years, during which he served on the President’s Forum and volunteered on numerous committees including audit, business development, finance, political involvement and others.

Downing also served on CHPA’s board of directors for 24 years culminating as chair from 2018 to 2020. During his tenure, CHPA achieved tremendous progress on its legislative agenda including long-sought landmark legislation to modernize the OTC Monograph system and restoring eligibility for OTC medicines under tax-preferred Health Savings Accounts and Flexible Spending Arrangement.

“Gary has always been extraordinarily active in his industry and his community,” Scott Melville, president and CEO of CHPA, said. “His incredible confidence, his willingness to embrace risk and change, and his gratitude and humility set the bar for executives not just in our industry, but for business leaders everywhere. We are delighted to recognize Gary with this year’s honor.”

Downing received the Combe award during CHPA’s SLS attended by his family, peers and more than 300 leadership executives from the consumer healthcare industry.