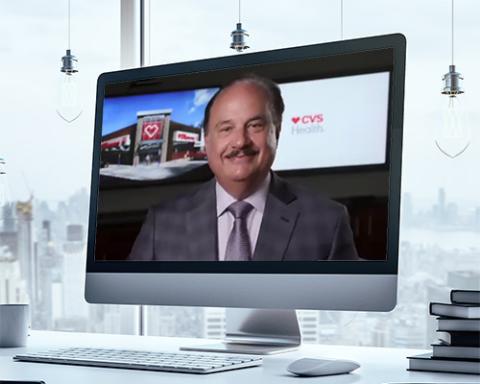 Merlo, who took the helm of the company in 2011, is retiring at the end of May after a roughly 40-year career that began at Peoples Drug, where he worked with the award’s namesake, Sheldon “Bud” Fantle. Merlo joined CVS in 1990 when Peoples was acquired by the company, and rose through the ranks until he moved into the CEO role.

Merlo was introduced Wednesday by Jon Roberts, executive vice president and COO of CVS Health and a longtime colleague of Merlo's, who highlighted the strength of Merlo’s leadership over the past 10 years. He credited Merlo with simplifying the company’s mission and vision statements.

“After Larry became CEO in 2011, he challenged us to clarify who we are as a company so that everyone — including our colleagues, customers and stakeholders — would know what we stood for,” Roberts said. “So, we replaced those mission and vision statements with a simple purpose: Helping people on their path to better health. Eight words that everyone could remember and that would go on to have a lasting impact not only on our company but on pharmacy industry and the U.S. healthcare system as a whole.”

“His life and career, Larry has always been guided by the power of purpose, and he has never lost sight of what inspired him to enter a career in health care to begin with. “He has been a vocal and tireless advocate for the role that pharmacists can and should play as providers of basic healthcare services.”
— Jon Roberts, CVS Health COO

Roberts said that Merlo’s leadership held as its cornerstones the values of innovation, collaboration, caring, integrity and accountability. “Larry knew that once you defined your purpose and values, they become the North Star that guides your decision making.”

As Roberts outlined, Merlo’s decision-making helped transform CVS the drug chain into CVS Health — a standout healthcare company. Roberts highlighted the 2014 decision to do away with tobacco sales, giving up some $2 billion in revenue annually to hew more closely to the company’s values, and he noted that Merlo’s focus on training and apprenticeships earned him recognition at the 2015 State of the Union, which he attended as a guest of then-First Lady Michelle Obama. At the same time, Merlo pursued horizontal and vertical integration efforts, culminating most notably in the 2019 acquisition of health insurer Aetna.

“As a result, today CVS Health is able to innovate new products and services — such as our HealtHUBs and new virtual care capabilities — to create a higher quality, simpler and more affordable healthcare experience,” Roberts said, adding that Merlo viewed the COVID-19 pandemic as an opportunity for the company to demonstrate its purpose.

“His life and career, Larry has always been guided by the power of purpose, and he has never lost sight of what inspired him to enter a career in health care to begin with. “He has been a vocal and tireless advocate for the role that pharmacists can and should play as providers of basic healthcare services.”

In accepting the award, Merlo thanked Roberts, his CVS colleagues, NACDS, the supplier community and his family. He also shared memories of what he learned from Fantle as an up-and-coming member of the People’s Drug team. He noted that Fantle would go to college recruiting events personally, emphasizing the importance of making a human connection. He also noted that Fantle was an innovator who piloted a pharmacy format that was staffed with a family physician and a dentist.

“The consumer wasn’t ready for it then, but Bud wasn’t afraid to try new things. It was the learning involved that mattered — another leadership lesson I carried with me throughout my career,” Merlo said. “I’m sure if Bud was with us today, he'd be pleased to see one of his pharmacists accepting this award.”

Over his 40 years in pharmacy, Merlo said that there have been two key elements — the role of the pharmacist and the role of innovation — that continue to be important for the industry’s continued success. He said that the pharmacist-patient relationship was the anchor in CVS’ retail strategy, extending that relationship to the front-store categories while offering convenience at the same time. Innovation, he said, drives collaboration with suppliers to create goals and it underscores the role of working with the government to expand pharmacists’ scope of practice.

“As for threats to the business, they won't subside — but I believe a focus through innovation and the role of the pharmacist will drive the industry's success for years to come,” Merlo said.