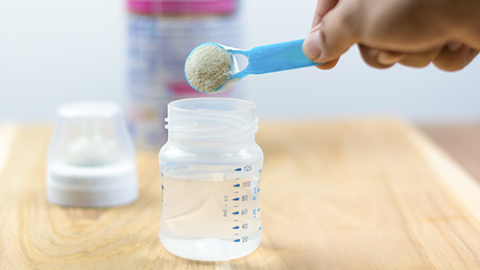 Some relief to the shortage of infant formula crisis is in sight.

Kendamil, a U.K. manufacturer, is in advanced discussions with the Food and Drug Administration to become the first international manufacturer to export significant quantities of non-medicated infant formula to the U.S. under Joe Biden's 'Operation Fly Formula' to address the ongoing formula shortage crisis in the U.S.

Kendamil is a brand of Kendal Nutricare, a family owned, Queen's Award-winning manufacturing business based out of the English Lake District, a UNESCO World Heritage Site. Kendamil is the only British made baby milk, supporting hundreds of dairy farms across the U.K. by sourcing its milk fresh from Red Tractor Accredited farms.

Kendamil is the highest-reviewed baby milk in the U.K. (Trustpilot, social media) its fame built on viral word-of-mouth from parents praising its British provenance and unique natural recipe, which uses whole milk as its main ingredient and source of fat versus the industry standard of 100% vegetable oils.

Kendamil also addresses growing consumer demand for more sustainable, ethical and natural products, by avoiding palm oil in their recipes and using plant-based Omega-3 over the conventional choice of fish oil (derived from offal). Kendamil offers organic and conventional cow formulas, along with goat formula (which would be a first in the U.S. where, unlike in Europe, no goat milk is today certified for sale to infants under age 1 year old), the company said.

Kendamil has been in discussions with the FDA for a number of weeks since news first broke of the formula shortages and the measures announced by the Biden Administration to bring international brands into the United States.

Following a meeting between Ross McMahon, CEO of Kendal Nutricare and the Prime Minister Boris Johnson at a Spring Showcase event at 10 Downing Street on May 9, communications were opened between U.S. authorities and the British Department of International Trade. Kendal Nutricare was among the first to respond to the FDA's call for assistance from international manufacturers, with Kendamil's English packaging and fully nutritionally-compliant recipe (including iron levels) ensured the brand was fast-tracked relative to other European brands. The factory in Kendal is capable of producing c. 10 million cans of 900g formula per year and though today is operating at c. 50% of its total capacity, given exponential demand from the U.K., Europe, Asia and now the U.S., plans are in place to more than double the site's capacity by 2024.

Kendal Nutricare expects to ship 100 trucks to the U.S. over the next six months, however management have made clear they will continue to prioritize their core markets and existing customers and so do not expect any impact on its existing markets or supply for U.K. parents, who today can purchase the award-winning Kendamil range in over 5,000 stores nationwide.

Kendamil is the U.K.'s fastest growing formula brand with 900% growth in UK sales over the past 12 months (compared to an overall infant formula market sales decline of 10% - The Grocer). Since its launch in 2016, the brand has rapidly scaled to sell in over 35,000 stores across 40 countries and four continents globally, making it one of Europe's 1,000 Fastest-Growing Companies (Financial Times) and scooping prestigious awards including the Grand Gold Monde Selection Award for Quality, the Queen's Award for International Trade and becoming a Fast50 Food and Drink company. The brand first received international recognition when it was reported that the Royal family had elected to wean Prince Louis using Kendamil formula, the company said.

Since then, the brand has grown rapidly and organically, driven by word-of-mouth and online testimonials with thousands of parents citing Kendamil's more natural taste and smell relative to other formulations. Although Kendamil started primarily as an export brand, having once accounted for over 10% of the U.K.s food export business to China, rapid growth in its domestic market mean the U.K. now accounts for 50% of the company's sales.

"We have received the call for assistance from the FDA and Kendamil stands ready to act," said Ross McMahon, CEO of Kendal Nutricare. "The urgency of the situation and scale of the U.S. opportunity will justify Kendal Nutricare doubling our capacity for Kendamil by 2024, increasing British dairy exports from Cumbria, creating more local jobs and providing long-term security for British dairy farmers."

Kendal Nutricare expects to meet the needs of at least 150,000 U.S. households during the import period, fueled by a unique, high-quality formulation at a cost competitive price when compared to existing incumbent and start-up brands.

"The relationship between the U.K. and U.S. is very strong and we look forward to bringing the highest-quality formula to U.S. parents, while supporting British jobs, local farming and organic dairy," McMahon said.

A solution to the shortage also is on its way from Abbott Nutrition. The FDA announced yesterday that it is not objecting to the release of about 300,000 cans of EleCare amino acid-based infant formula previously produced at Abbott Nutrition’s Sturgis, Mich., facility to individuals needing urgent, life-sustaining supplies of this specialty formula on a case-by-case basis. These products will undergo enhanced microbiological testing before release. Although some EleCare product was included in Abbott Nutrition’s infant formula recall, these EleCare products that will be released were in different lots, have never been released and have been maintained in storage under control by Abbott Nutrition, the FDA said.

These EleCare product lots were not part of the recall but have been on hold due to concerns that they were produced under insanitary conditions observed at Abbott Nutrition’s Sturgis, Mich. facility. As noted above, these products will undergo enhanced microbiological testing prior to their release, the FDA said.

Given the critical need of this product for some individuals, the FDA encourages parents and caregivers to consult with their healthcare providers to weigh the potential risk of bacterial infection with this product. The FDA will continue to work closely with healthcare provider organizations and stakeholders to understand the potential risks and benefits of using this product. Parents and caregivers seeking access to these products should contact Abbott directly to request that a product be made available to them by calling 1-800-881-0876. Parents and caregivers should continue to work with their medical provider to consider whether comparable alternative products may be appropriate, the FDA instructed.

The FDA also announced that in response to the agency’s concerns, Abbott has confirmed to the agency that EleCare will be the first formula produced at the Sturgis facility when it restarts production, and other specialty metabolic formulas will closely follow. Additionally, under the consent decree with the FDA, Abbott is required to retain an independent expert to review the Sturgis facility’s operations to ensure compliance with the law.