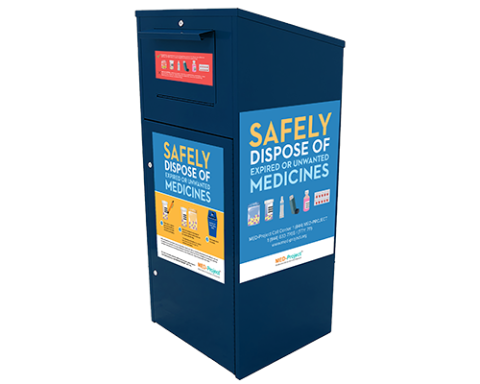 Kinney Drugs, a 100% employee-owned leading pharmacy chain in New York and Vermont, has partnered with the NYS Bureau of Narcotic Enforcement and MED-Project to complete the installation of self-service medication collection kiosks in all 75 of its New York stores.

In March, the company had installed kiosks in 22 of its New York locations with the intention of expanding to all locations.

Anyone, not just Kinney patients, can use these kiosks to dispose of unneeded medications, including leftover and expired medications. The kiosks accept prescription and over-the-counter medications for both humans and pets, including controlled substances.

The kiosks are not for disposal of sharps/needles (including EpiPens), medical/biohazardous waste, regular or hazardous household trash, or personal care products. The installation of these units brings Kinney to 83 kiosks in total, as the company had previously installed eight medication collection kiosks in its stores in Vermont, including Barre, Barton, Cambridge, Lyndonville, Newport, Saint Albans, Saint Johnsbury and Waterbury.

The kiosks will allow consumers to safely dispose of unwanted medications. The American Association of Poison Control Centers and the Poison Help Hotline (1-800-222-1222) poison centers responded to more than 2 million human exposure cases in 2020, 77% of which were unintentional. Approximately 40% of all poisonings involved prescription and/or over-the-counter medications. In addition, 42% of all poisonings involved children under the age of five.

“It is crucially important to dispose of medications properly to prevent diversion into the wrong hands or the environment. As a pharmacy, Kinney Drugs is dedicated to keeping people healthy, and these disposal sites provide an easy, convenient way to safely dispose of unwanted medications,” said John Marraffa, Kinney president.

“As a pharmacist and father, I wholeheartedly support doing everything we can to help keep everyone — especially children — safe from harm,” he said.