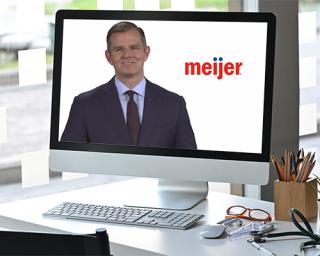 The unprecedented acceleration and transformation that has occurred in the industry and NACDS members’ response to fight COVID-19 has redefined for the ages what it means to save lives, to serve consumers in times of need, and to provide a truly essential health and wellness destination.

That was the message delivered by NACDS president and CEO Steve Anderson, speaking Monday at the first Business Program at 2021 virtual NACDS Annual Meeting.

In his remarks, Anderson noted that in 2019 increasing healthcare affordability and helping to solve opioid abuse was crucially important, and while it is still a priority for NACDS, he described 2020 as "a year of empowering pharmacies, a year of overcoming needless barriers, a year of securing and enhancing the authority of pharmacy teams to test and vaccinate. It also was a year defined by a vigorous focus and progress on NACDS priorities, pharmacies' viability, patients‘ access to pharmacies, reducing patients healthcare costs, and confronting drug abuse."

Anderson said that from the early days of the pandemic — when federal officials told the organization and its members to stay open in recognition of their role in people’s lives — to now, NACDS members are leading the charge to reopen America. "What has happened between then and today, and what will happen moving forward is nothing short of a revelation of our industry’s power to serve, to safeguard and to heal,” he said.

Anderson noted that 2020 also was the year of retailers and suppliers working together in new ways. "It has been a year when the unprecedented needs of the consumer forged an even sharper focus on those we serve," said Anderson.

Partnership also was the focus of the Business Program's first speaker, Lisa Paley, General Manager, U.S. and Puerto Rico at GSK Consumer Healthcare. She discussed the various ways that her company and the industry have risen to the occasion through a focus on humanity throughout a difficult time.

“At records speeds, we forged new collaborations on adjuvants, treatments and vaccines with companies like Sanofi, Medicago and SK Bioscience," she said. "Most recently, we announced a partnership with Novavax to manufacture 60 million doses of their vaccine at one of our facilities in the U.K. I know we are definitely not alone. Many of us across the industry have come together and worked as one. In each instance, we let humanity lead and did what we could to protect people from the pandemic."

In recognition of the efforts of the entire industry, Anderson said that this year, NACDS is bestowing its Harold W. Pratt Award on all of the teams of the organization’s chain and associated members. “In the spirit of Harold Pratt they have pioneered, persevered, lead and inspired and they are the face of neighborhood health care and the face of health and wellness,” he said.

Rick Keyes, current NACDS chair and Meijer president and CEO, also reflected on the past year and how, in spite of various challenges, 2020 brought many advances that offer the industry momentum for the future, particularly with regard to pharmacists’ abilities to provide care.  “From the earliest days we’ve overcome barriers and won flexibilities at the federal and state levels, to make it possible for pharmacies to staff wisely and safely, conduct operations efficiently, help patients stay on their medications, expand delivery options, and put patient care over paperwork,” he said.

Kayes said that reimbursement policy also was a particular bright spot of the past year, including a Supreme Court decision that upheld state authority to regulate pharmacy benefit managers and DIR fee reform.

Keyes also credited the pharmacy industry for stepping up and playing a critical role during the pandemic. "The traditional role of the pharmacist in the healthcare field has expanded,” said Keyes. “This is the result of NACDS and board of directors working with the administration to get that access.”

Keyes also noted the role the industry is playing with the vaccines and "the speed at which we were able to hit the 100 million milestone and beyond which wouldn’t have been possible without retail pharmacy.”

This was a sentiment Anderson shared, highlighting NACDS’ assertion that pharmacies are able to administer 100 million shots in 30 days. “Today, the fact is we still have capacity and we can do more. Pharmacies turned vaccine doses into vaccine appointments within five miles of 90% of Americans and they do so with efficiency, equity and convenience.”

For all of the industry’s accomplishments, Keyes emphasized that this is just the beginning for the industry as the country moves toward the end of the pandemic.

“We’ve come a long way. We’re far from done. The pandemic isn’t over. We need to keep a focus on vaccines and see this through to the end,” he said. “This is an inflection point for our industry. We’ve shown the capability of what pharmacy can do when we work together. Pharmacy has helped heal our country. We will remain focused on fair and transparent reimbursement. We will continue to heal."