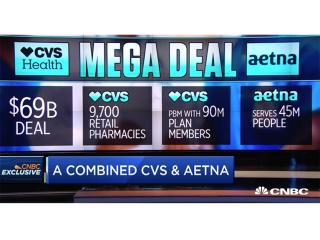 The heads of CVS Health and Aetna took to CNBC’s “The Squawk Box” Monday morning to outline how the two companies’ proposed $69 billion cash-and-stock merger will impact consumers. Larry Merlo, president and CEO of CVS Health, said that its acquisition of the Hartford, Conn.-based insurer would create a new way for patients to access care — and plays to areas in which both companies were looking to bolster their positions.

“As [Aetna chairman and CEO] Mark [Bertolini] and I continued to have discussions in terms of ‘How can we do things more strategically?’ it was clear as CVS Health was moving to become more of a healthcare company and getting closer to payers, Mark had a similar strategy in terms of getting closer to the customer,” Merlo told CNBC. “It’s really the perfect time to bring these two companies together to create a new healthcare platform that can be easier to use and less expensive for consumers and really create a new front door to health in our country.”

Think of an idea where we have 10000 new front doors to the healthcare system, where people can walk in, they can ask for some help, get guided through the system,” Bertolini said. “We can make the insurance the back room of the operation, we can waive prior authorizations, we can waive copays as people use the system in a way that’s more effective so we can reduce costs. It’s simpler, it’s customized for the individual based on what they need and it’s cheaper.”

The companies’ post-merger plans include turning CVS Pharmacy locations into healthcare hubs where patients can seek guidance on their conditions, health coverage and prescription medications. Merlo said that if the deal goes through — the companies expect it to close in the second half of 2018 pending regulatory approval — its efforts to leverage both companies’ strengths would start immediately.

“Upon closing, there’s things that we’ll be able to do out of the gate,” Merlo said. “At the same time we’ll begin to pilot these concepts, we’ll learn from them, and I would expect within the next couple of years, you'll see a dramatic change in terms of the store not just being about products but also service offerings that can help people on their path to better health.”