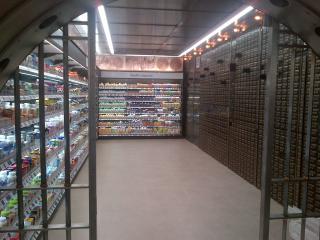 This is Walgreens second flagship store in Chicago and, like its downtown State and Randolph flagship location, features an extensive collection of innovative offerings, products and services many may not expect to find in a drug store. “It was thrilling to restore this architectural gem once again into a thriving business anchor in the Bucktown/Wicker Park area,” stated Joe Magnacca, Walgreens president of daily living products and solutions. “This flagship store will provide customers with a unique shopping experience within an iconic building. It’s the latest example of how we are stepping out of the traditional drug store format and helping people get, stay and live well.”

The Noel State Bank building, constructed in 1919, was designed by Gardner Coughlen in a neo-classical style. The original bank fell victim to a bank run during the Great Depression and has housed several different banks over the decades, the last being Midwest Bank, which closed several years ago.

Throughout the last two years, Walgreens has worked closely with the city’s Commission on Chicago Landmarks on the building restoration. The exterior is clad entirely in ornamental terra cotta. Large windows are divided by rising pilasters topped with Corinthian capitals, and a prominent cornice wraps around the rounded corner of the building.

Extensive restoration took place on the building’s coffered plaster ceiling, which features abundant non-symmetrical hexagons that frame griffins and other ornate designs, all of which form into successive yet subtle Star of David patterns. At the center is a large stained glass window with a six-point star design. Walgreens also restored the interior columns topped with pilasters and the original bank vault, which will be repurposed as a “Vitamin Vault” in the store’s health and wellness section. Original bank lockboxes open and display various vitamin products.