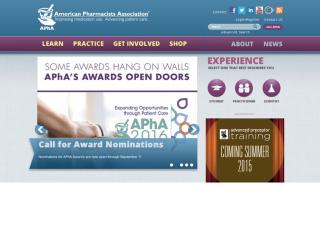 WASHINGTON — Nominations are now being accepted for the American Pharmacists Association annual awards and honors program. The awards will be presented at the APhA Annual Meeting and Exposition in Baltimore from March 4 to 7, 2016.

•    Research Achievement Award in the Pharmaceutical Sciences: recognizes outstanding, meritorious achievement in any of the pharmaceutical sciences. In 2016, the award will recognize contributions in the area of basic sciences.

Fellows of the American Pharmacists Association:

Guidelines for nominations and complete criteria for each award are available at pharmacist.com/awards. Nominations are due no later than Sept. 1 (Honorary President: Oct. 15).