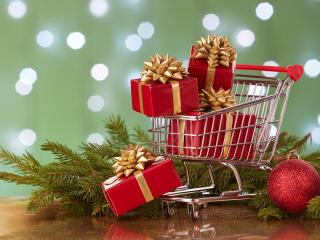 Free consistently trumps fast when it comes to holiday shipping.

Here are other highlights from the report:

Most shoppers willing to trade personal information for discounts:
• More than half of consumers are comfortable sharing basic demographic information with retailers, such as their gender (56%) and first and last name (53%).

• Retailers have a smaller chance of obtaining certain types of personal information from consumers like geolocation (18%), financial history and credit scores (16%) or biometric data (12%).

• People may be willing to share information if they get something in return: Sixty-one percent of respondents say they would take a promotion or discount in exchange for sharing personal information.

Shopping on PCs and tablets flattening, while mobile continues to accelerate:
• More than two-thirds (67%) of smartphone shoppers plan to use their phones to make a purchase, up from 59% last year.

• This holiday season, 76% say they’ll use their desktop or laptop to shop, making it the most preferred device, but down from 83% in 2017. Tablets remain relatively flat, at 22%.

• Newer technology has yet to capture attention. Only 5% surveyed said they’d use voice assistant for shopping, 5% for social commerce, and 4% said they’d engage in virtual reality technology.

Younger generations more likely to gravitate toward discount shopping days and sustainable products:
• More than half (54%) of Generation Z (ages 18–23) and Millennials (ages 24–41) (53%) say they’ll rely on Black Friday compared with only 37% of seniors. Those numbers are higher for Cyber Monday, where 63% of Generation Z and 62% of Millennials indicate they’re sticking with Cyber Monday shopping as in the past.

• Younger shoppers appear more willing to consider a higher price tag for social responsibility at checkout. Nearly nine in 10 (87%) of Generation Z and three quarters (75%) of Millennial shoppers are willing to pay more for sustainable products. By comparison, almost half (47%) of Baby Boomers are not willing to pay extra.

No lumps of coal for retailers impacted by past data breaches:
• Of the 77% of shoppers who are concerned about retailers who experienced breaches, 91% say they would continue to shop those same retailers. Almost half (46%) indicate they would return if the retailer acted to regain their trust, and 34%) say they would change their method of payment. Only 7% said they would never shop at that retailer again.

“People seem to understand that breaches are unfortunately more common, and are willing to give back business to retailers who step up to regain their trust,” said Matt Marsh, partner, Deloitte & Touche LLP and global and US risk and financial advisory leader for the retail and distribution practice. “For retailers, having the response plan in place ahead of time can help prevent them from getting crossed off shoppers’ lists.”
Advertisement
Advertisement
Advertisement