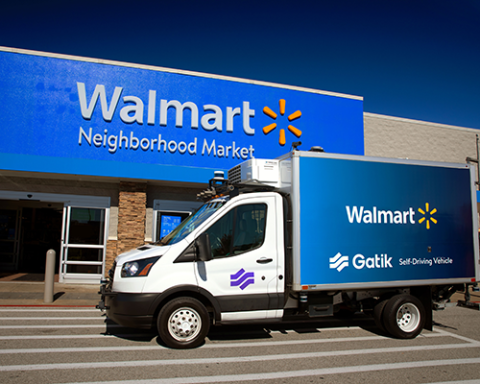 Walmart is the first company to use autonomous delivery trucks with no safety driver in the “middle mile” of its supply chain.

The discount giant is moving online customer orders for fulfillment from a fulfillment-only dark store to a store in its headquarters city of Bentonville, Ark., with a fleet of multi-temperature autonomous box trucks from Palo Alto, Calif.-based startup Gatik. Walmart is making these autonomous deliveries without having a human safety driver in the truck.

According to Gatik, its deployment with Walmart in Arkansas represents the first time that an autonomous trucking company has removed the safety driver from a commercial delivery route on the middle mile (where goods travel between warehouses or from a warehouse to a “last mile” pickup point, such as a store or sortation center) anywhere in the world. Gatik specializes in providing autonomous vehicles for business-to-business short-haul logistics.

The two companies initially launched a pilot of driverless deliveries on a two-mile route between the dark store and local Neighborhood Market store in Bentonville in July 2019. Now, Walmart is regularly moving customer orders along the route with Gatik autonomous vehicles.

Walmart’s fully driverless operations with Gatik autonomous vehicles, which moved out of pilot into full deployment in August 2021, involve consistent, repeated delivery runs multiple times per day, seven days per week on public roads. According to Gatik, benefits include increased speed and responsiveness for e-commerce fulfillment, increased asset utilization, and enhanced safety for all road users.

In the past few years, Walmart has been actively piloting different autonomous vehicle technologies as a means of delivering online grocery orders. In January 2019, the retailer initiated a pilot of home grocery delivery with autonomous vehicle company Udelv in Surprise, Ariz. In Nov. 2018, Walmart partnered with Ford Motor Co. and Postmates to test self-driving vehicles to deliver fresh groceries.

Gatik data indicates that in the last decade, shorter, urban supply chain routes have become more prominent, with 65% of all routes under 500 miles and routes under 100 miles growing by 37% in the past decade.

“Through our work with Gatik, we’ve identified that autonomous box trucks offer an efficient, safe and sustainable solution for transporting goods on repeatable routes between our stores,” said Tom Ward, senior VP of last-mile at Walmart U.S. “We’re thrilled to be working with Gatik to achieve this industry-first, driverless milestone in our home state of Arkansas and look forward to continuing to use this technology to serve Walmart customers with speed.”

“This milestone signifies a revolutionary breakthrough for the autonomous trucking industry,” said Gautam Narang, CEO and co-founder, Gatik. “Our deployment in Bentonville is not a one-time demonstration. These are frequent, revenue-generating, daily runs that our trucks are completing safely in a range of conditions on public roads, demonstrating the commercial and technical advantages of fully driverless operations on the middle mile. We’re thrilled to enable Walmart’s customers to reap the benefits.”