When Marc Trobman discusses changes in the greeting card industry, the vice president of business development at Avanti Press likens them to the mainstreaming of craft beer. While everyday brews from two national players still dominate, companies with higher priced, niche offerings have gained significant market share over the past two decades. And, they have helped retailers differentiate and generate higher margins.

As with national beer brands in the 1990s, overall greeting card performance in recent years has been relatively flat, with annual sales around $6 billion, various greeting card executives have estimated. At both Walmart and CVS Pharmacy, their CEOs have discussed downsizing greeting card sections, USA Today reported in March.

Yet when it comes to regional retailers and specialty merchandise, the category is thriving. While many national retailers utilize one or two big suppliers, such regional players as Wegmans, H-E-B, Meijer, Fairway, IGA, Lidl and some local drug chains combine offerings from large players with products from smaller niche-oriented ones. Popular among millennials, these unique destination assortments yield higher profits, with prices that can hit $10. Emphasis often is on humor and distinctive designs, and verses are straightforward and to the point.

“The category is definitely not as large as it once was,” said Dale Campbell, buyer and supervisor at Discount Drug Mart, which operates more than 70 Ohio locations with card sections spanning 200 linear feet. “At the same time, we offer one of the biggest card departments around, and I’m pushing 2% growth for 2019. To be successful, you need to offer the best of both worlds: a main department for the core customer, who buys a dozen to two dozen cards annually, and specialty offerings to attract others.”

Spinner racks with novelty, pop-up and other cards from Avanti and Oatmeal Studios complement cards and wrapping paper from Hallmark, Campbell’s primary supplier. Up With Paper’s high-end merchandise is featured seasonally. Dollar and ethnic card sections also exist. The latter range from to 4-to-12 feet depending on the market.

National chains, however, can have a less diverse vendor mix. “You go into Walgreens or Kroger and it looks the same,” Trobman said. “But retailers that use complementary vendors have year-over-year growth. Wegmans uses 15 vendors. They spend time working with them. Many other retailers let the main vendor run the category and don’t work it.”

Smaller regionals like Busch’s Grocery in Canton, Mich., and Sunset Foods in Chicago sometime bypass big suppliers altogether. Their boutique approach emphasizes one or two specialty vendors. At Busch’s Grocery, Design Design is the exclusive supplier of wrapping paper, party goods and birthday candles. “It’s about creating an experience,” Don Kallil, Design Design’s president, said. “Regionals seek us out because we can offer a different choice than the national chains.”

Changing preferences in graphics and language also reflect a need to capture shoppers’ attention quickly. “Consumers are more pressed for time,” Laserson said. “This has translated to a need for cards that speak in straightforward language. In design, a striking image or quick, punchy copy works well.”

For millennials, who do almost everything online, specialty paper cards have high perceived value and stand out in a world besotted with digital communications. This gives added meaning to the sentiment of sending a card.

“Some findings about millennials we’re seeing in our research go against common assumptions,” Amy McAnarney, Hallmark Cards’ vice president and general manager of key accounts and development, said. “They recognize that digital connections are fleeting. Millennials associate paper with artistry, collectivity and luxury. When they want to make a more meaningful connection, they choose a greeting card.”

Dawn Garvey, CFO at Designer Greetings, also views paper cards as the antithesis of digital communication. “Coming out of an impersonal decade where people were entrenched in texting, we’re swinging back to more intimate ways of sending sentiments. For millennials, it’s not appropriate to send Mom or a best friend a text for their wedding or as a sympathy sentiment. If the average card is $2 to $4, they’ll spend $8 or higher. They want something different and have changed how products go to market.”

Many specialty products are made from heavy paper and/or feature such embellishments as ribbons, fabric, foil or glitter. Some are three-dimensional. Color palettes follow fashion trends, supplanting what some said traditionally has been a sea of pastels. Verses are shorter and less poetic. Up With Paper’s Independence Day card, for example, lit up with a flag and fireworks.

“Millennials aren’t going for rhyming verses and pastels,” George White, president of Up With Paper, said. “They want more relateable language, pop-ups and electronic stuff. They want something cool they’ve never seen before.”

Even animals wax and wane in popularity. “Llamas have been trending lately,” White said. “A few years ago, it was unicorns.”

The $11 Card
Specialty cards can carry price tags as high as $10.99. While boomers buy more cards, millennials will pay more for something special. McAnarney said millennials spend about 20% more on greeting cards than other age groups and represent 20% of dollars spent. They are Hallmark’s fastest-growing consumer segment, with spending increasing 6% annually.

To better serve this demographic, Hallmark introduced the Paper Wonder line during the 2018 holiday season. The pop-up, shadow box cards transform themselves into 3-D tabletop décor when opened. Prices are in the $9 range. “Each card is a mini work of art that comes to life through a series of clever folds, pops and artistic details to reveal an intricate scene,” McAnarney said.

“Acquisitions have expanded offerings in areas where we didn’t have depth of product,” Garvey said. The company also offers a line of chalk-board style cards and a value program called Card Smart.

Photographic cards are strong performers for other companies, too. Avanti’s AMERICA line uses archival photography from the 1890s through 1980s. Cards have “warm” verses and the photograph’s story on the back,” Trobman said.

Its Avanti brand uses photos and humor that put animals in lifelike situations. “The anthropomorphic reality makes you laugh out loud,” Trobman said. A third brand, A*Press, uses illustrations and humor, along with such embellishments as flocking, foil and glitter on its cards. Most Avanti products retail for $3.99 to $4.49. Premium brands can exceed $10. 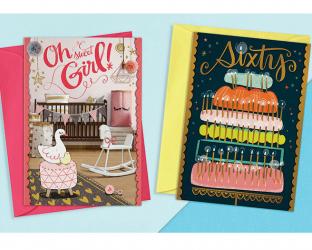 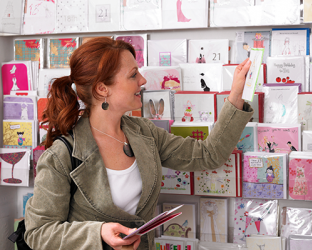 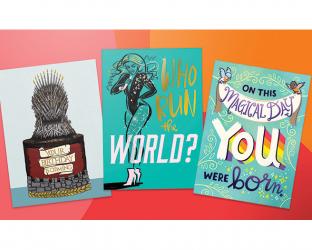 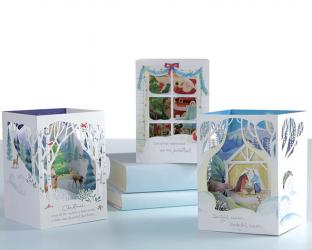 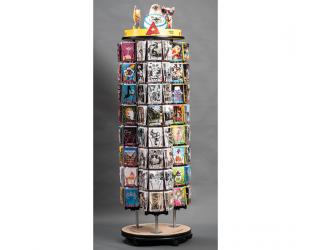 News
It’s all in the cards: What’s driving the greeting card industry forward?