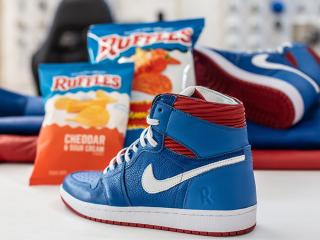 Ruffles, the official chip of the NBA, announced that it has partnered with six-time NBA All-Star Anthony Davis.

The partnership puts Davis in the driver’s seat as a creative partner to help develop bold products and offer fan experiences with the chip brand, the company said.

To celebrate the partnership, Davis visited the NBA flagship store in New York City and debuted a signature shoe that was inspired by the snack brand, The Ruffles Ridge Tops. Designed by the famed Shoe Surgeon of Los Angeles, fans will have a chance to win the sneakers and other prizes from June 24 to August 4 by entering the on-pack code a pack of Ruffles will contain.

"Ruffles keeps finding new ways to make the game more fun for basketball fans and a 'Chip Deal' in itself is unprecedented – which is exactly why I wanted to do it," Davis said. "From the design of The Ridge Tops to new flavors and contests, I have a lot of ideas and Ruffles shares my excitement for making them happen."

Ruffles Ridge Tops were hand-made to accentuate signature attributes of the chip brand, and also boast the bold colors of a Ruffles bag. In addition, there are interchangeable shoelaces that were inspired by the shades of fans’ favorite flavors, the company said.

"AD's passion for the game is palpable and it's been a privilege to partner with him on ways we can harness that passion to connect with fans throughout the entire season, both in-game and at-home," Sadira Furlow, the vice president of marketing at Frito-Lay North America said. "We're only just launching the Chip Deal, but already you can expect to see much more from Ruffles and AD in the coming months."
Advertisement
Advertisement
Advertisement