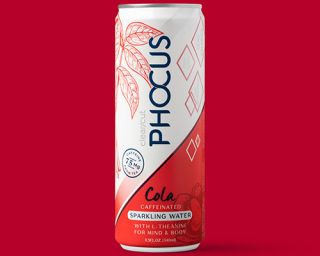 Phocus is expanding its sparkling water offerings by adding a new flavor into the mix.

New from the Louisville, Ky.-based company is its Cola flavor, which contains natural caffeine from tea and the amino acid l-theanine.

“With Cola, we wanted to go back to why John Mittel and I launched Phocus in 2017 — to develop a cleaner alternative to sodas and energy drinks,” Phocus co-founder, Tom O'Grady said. “Phocus Cola really makes you rethink what it means to be a sparkling water versus a soda by deriving the classic cola flavor from natural extracts, but maintaining the Phocus commitment to natural caffeine, refined carbonation, and most importantly, no bad-for-you additives.”

To create the flavor, the brand blended together extracts of cinnamon, citrus and vanilla with notes of caramel to create a cola taste, the company said.

In addition, the flavor does not contain sugars, sweeteners, sodium or calories.

Phocus’ Cola flavor is available for immediate purchase in single order and in monthly subscription service options via drinkphocus.com, and will also launch at retail locations nationwide.