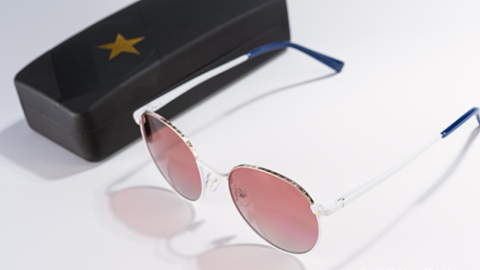 They are available exclusively at Walmart.com for Sir Elton’s final U.S. concert at Dodger Stadium in Los Angeles.

"The “L.A.’22” limited-edition sunglasses are an updated version of the iconic frames the legendary singer wore at his two career-defining, sold-out concerts in 1975 to celebrate the end of his U.S. touring career in the same venue,” said David Reitnauer, vice president health & wellness of Optical and Hearing at Walmart, on a blog post.

As part of the limited-edition launch, 600 numbered sunglasses will be available online for $99 – each coming with a commemorative case, keepsake cleaning cloth and limited-edition packaging featuring the image of Sir Elton performing in the original frames. Similar to the legendary concert, once these frames sell out, they will not be restocked, Reitnauer said.

Sir Elton is well-known for bringing his stage and personal style to life in his performances. Designed to be fun and vibrant like the performer’s costumes and stage antics, the white metal frames with rose gold tinted lenses feature an on-trend retro round style adorned with star detailing to pay homage to the Dodger uniform Sir Elton wore at the original concert. The singer's name is etched in the lenses.

“Eyewear is an integral part of my personal style," John said. "My archive of optical and sun frames inspire so many of the designs in the Elton John Eyewear collection, including the L.A. ’22. Celebrating this pinnacle moment in my career, and being able to share it with Walmart customers through such a versatile and universally flattering frame, is so special to me.”

Launched in 2021 in collaboration with Walmart and Sam’s Club, the Elton John Eyewear collection brings his signature glasses to the masses and is designed to have something for everyone. The ‘Rocket Man’ singer has more than 60 frames  available in stores at Walmart Vision Centers, Sam’s Club and online at Walmart.com.

“I’m proud that this launch supports the Walmart pledge to donate a minimum of $1 million annually from the Elton John Eyewear collection to support the Elton John AIDS  Foundation," Reitnauer said. "This partnership is a natural extension of Walmart’s mission to help their customers live better, healthier lives by providing quality, affordable and accessible health care in the communities they serve – including access to HIV health resources.”