Retail pharmacies may know about CBD because the Food and Drug Administration in 2018 approved a CBD isolate, Epidiolex, from GW Pharmaceuticals. But the conditions for which Epidiolex was approved are limited to two rare, child-onset epileptic conditions.

Industry leaders with an ear to the ground likely know about CBD because its popularity has percolated throughout the culture over the last few years. Used for stress, anxiety and pain, CBD is sold in supplements, topical creams and lotions, beverages, and even foods. It’s sold in as wide a range of sales channels as any product ever, from health food stores and boutiques to ice cream shops and department stores.

CBD, of course, has remained in regulatory limbo since the enactment of the 2018 Farm Bill, with industry associations calling on the FDA to allow CBD to be marketed as a dietary supplement and be regulated as such. The product is available mainly in topical form because the FDA has repeatedly declared that it does not qualify as a dietary supplement ingredient since the agency approved it as a drug.

Risk-averse retailers from mainstream big box stores to pharmacies have tended to shy away from the uber-popular tincture bottles and even gummies, which have really taken off in the last year or so.

Despite the lack of positive rulemaking to affirm CBD’s legitimacy in the market, the FDA’s actions against CBD manufacturers have been limited to warning letters about making illegal drug-disease claims instead of softer supplement-style structure/function claims.

“Despite obstacles by the FDA, if CBD companies operate like good dietary supplement companies and make no illegal health claims, I don’t think the FDA is going to come after you,” said Steve Hoffman, principal of Compass Natural Marketing, which represents a number of CBD companies.

That means retailers looking to stock hemp-CBD supplements should look at how products are positioned. Any claiming to prevent, cure or treat any disease states should get a hard pass.

Cannabis market forecaster BDSA predicts that the FDA will indeed provide a regulatory pathway for CBD in 2022. The firm said once regulatory clearance is achieved, the pharmaceutical channel is poised to take 12% of the market — an estimated $2.36 billion. Mainstream retail, which includes retail pharmacies, will take 77% market share, or close to $15 billion.

“There seems to be less resistance in the marketplace for CBG, CBN and CBC.” — Rick Trojan, director of business development at CBD Universe and vice president of the Hemp Industries Association

2022 Product Trends
In any event, there is still a market for topicals, which the FDA regulates at a lighter threshold than foods or drugs.

CBD is marketed in beauty products, cosmetics and other topicals primarily for its inflammation-modulating effects. By calming the skin, it can benefit those with sensitive skin irritations. It also provides pain relief.

Topicals make up 10% of the total hemp CBD market, with an impressive growth rate forecast of 33% per year through 2024, according to market watcher Technavio.

While oil tinctures will remain the most popular format, and drinks and gummies expected to be the fastest-growing product types, hesitant retailers may dip their toes with creams, balms and lotions.

“Delivery systems are a definite trend,” said Jessica Mulligan, founder of the Winged Women’s Wellness brand. “CBD tinctures are inconvenient and messy for the consumer.

“Despite obstacles by the FDA, if CBD companies operate like good dietary supplement companies and make no illegal health claims, I don’t think the FDA is going to come after you,” said Steve Hoffman, principal of Compass Natural Marketing, which represents a number of CBD companies.

Another trend for ingestible supplements is the emergence of minor cannabinoids — those other than THC and CBD — with specific health benefits. CBN for sleep and CBG for focus are the top two on the market today.

“There seems to be less resistance in the marketplace for CBG, CBN and CBC,” said Rick Trojan, director of business development at CBD Universe and vice president of the Hemp Industries Association. “I’m not sure if it’s a result of misunderstanding about CBD or the fact they are quote ‘nonintoxicating.’”

He pointed out a new trend in formulations that include CBD as part of the functional attributes with supplement-style ingredients such as valerian root, ashwagandha and turmeric.

Expect more to come on the pharma front. In 2017 Johnson & Johnson entered an agreement with cannabis firm Avicanna. In 2018 Novartis entered a supply and distribution deal with Canadian cannabis company Tilray. And just last December, Pfizer spent $6.7 billion to acquire Arena Pharmaceuticals, which has one segment of its drug pipeline dedicated to cannabinoid-type therapeutics highlighted by an investigational drug candidate called Olorinab. 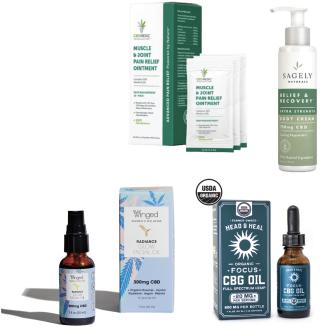 Winged Women’s Wellness is a unique brand created by and for women. A blend of 15 botanical oils in its Radiance CBD Glow Facial Oil provides deep hydration for a glowing complexion, softens the skin’s surface and soothes red or flaky skin.