New York Giants’ guard Justin Pugh is a big guy — six foot, four inches and 300 pounds — with a big beard. He even has a playbook for his facial hair care.

“Depending on what event I’m going to, I can adjust [the setting of my device]. If I’m getting ready for a game and it’s getting colder out, I want to get it a little bristly,” said the NFL player and Conair spokesman of his go-to product from the revamped Conair Man collection called the iStubble Flexhead Trimmer.

Pugh’s comments reflect how he treats shaving as a ritual, and it underscores why brands are putting so much emphasis on carving out a bigger share of the $4 billion spent on the mass market shave category — including electric shavers. “Guys are finicky and don’t want to keep switching,” he said.

The game plan is different for women. “My girlfriend, on the other hand, will go out and try different products,” he said. That, in a nutshell, is the difference between marketing to men and women in the shave category. For men, it has become a ritual, for most women it is a chore that keeps them on the hunt for what’s next. Some industry experts believe the two worlds should merge to become gender neutral. But for now men’s and women’s categories have their own domains.

Men continue to show passion for their facial hair. According to Kevin Morton, marketing manager at Conair Man, 70% of men have some form of facial hair to maintain. He added longer beards are trending up.

Lisa Price, brand manager of the men’s division at Universal Beauty Products, agreed. “Beards continue to be a hot trend because men are finally taking care of them. An out-of-control beard isn’t attractive on anyone, but a well-moisturized, tamed and styled beard makes the grade,” she said.

The artistry of maintaining beards and other facial hair has nudged up sales of such products as traditional safety razors, shave oils and even electric shaving tools. Electric shavers, in fact, cracked into the black in multi-outlets, according to IRI data for the 52-week period ended Sept. 10. That’s good news because the category brings in high-dollar rings and better gross margins than wet-shave options in many cases. Philips Electric is the leading brand, followed by Wahl, Remington, Procter & Gamble and Panasonic. But Conair executives expect to make headway in the category this year with a revved-up offering with its I-Stubble Ultimate Trimmer, Personal Grooming Kit and Ear/Nose Trimmer.

A battle continues among the behemoths in the wet shave razor and blade business — one punctuated by legal actions versus the race for innovation that used to dominate the category’s news. In the past, the leaders had a constant churn of innovation, often in the form of more blades. Now some of the fight comes in regard to patent infringement. Most recently, Procter & Gamble’s Gillette division sued Edgewell, the maker of Schick razors, for the second time in 13 months, seeking to stop its sale of razor blade cartridges designed to fit Gillette’s Fusion handles. In a complaint, Gillette said Schick willfully infringed its 2015 patent for a removable-shaving cartridge assembly by designing Hydro Connect 5 and Hydro Connect 5 Sensitive cartridges to fit Fusion razor handles.

Earlier this year, Schick entered into the online subscription business with a blade that fit on the Gillette handle, but cost less. Gillette had already sliced its razor prices an average of 12% to attempt to stem the flow of market share to online options.

Nonetheless, Dollar Shave Club and other online outlets, have made a dent in retail volume, especially of blades where both cartridge and disposable sales are down, according to IRI. Physical stores are fighting back with Target and Rite Aid among those building men’s departments within their stores with a laser focus on shaving.

According to IRI data, P&G dominates cartridge sales, although its dollar volume dropped 15% in the 52-week period ended Sept. 10. Edgewell is second and also saw an 18% decline. In disposables, P&G also leads, although volume was down 5%. Bic is No. 2, but registered 10% declines. In razors, market leader P&G registered flat sales, while No. 2 Edgewell nabbed 3.6% gains. Notably, Harry’s — now sold at Target — saw sales soar more than 900%.

In the midst of the squabbles among the giants, some disruptor brands have emerged. Universal Beauty Products’ Van Der Hagen is a case in point, with its cartridge sales soaring 64%, according to IRI data.

The company also has a hit with its throwback single-blade entry. “Consumers are smart, savvy and looking for the best way to shave, even if it means going the extra mile. Shaving with a single blade requires more time and practice, but men are responding positively to its back-to-basics authenticity and vintage style,” said Universal Beauty Products’ Price. Today’s men are incorporating their sense of identity into their morning routine, and choosing to pick up a safety razor is proof.”

Clio, a line of battery-operated shavers and bikini trimmers, also has shaken up the market with its trendy designs that update the look of traditionally mundane products. According to Nielsen data, Clio is the No. 1 supplier of women’s grooming appliances.

Speed Razor, a head-and-body shaver is gaining traction for its breakthrough design. The product, available in a men’s and women’s version, was a standout at ECRM’s Personal Care, Grooming, Oral and Travel/Trial EPPS meeting in July, and now the company is looking to make the move from direct and online sales to offline. “It is the next generation in shaving,” said Kevin Schmidt the creator of Speed Razor.

Another product gathering attention at the show was a unique item — Legacy Shave — which is a shave brush that fits on any can of gel or cream. Legacy also is looking for mass-market distribution.

“As a group, they are independent minded and not as susceptible to marketing methods established for previous generations. Our unconventional style and approach make them a perfect fit for our marketing and social media campaigns,” he added. This year has been a year of strong growth, he said. “Our sales and distribution continue to grow by triple digits, and thanks to our partnership with Daymond John — from ABC TV’s “Shark Tank” — and his company The Shark Group, we’ve exploded on social media.”

In the case of Speed Razor and Bee Bald, marketing messages are unisex, and some industry experts think the shave category could benefit from that approach. In a published report from London-based brand and design consultancy Two by Two, the authors Louise Barfield and Imogen Matthews suggested that for men’s grooming, including shave, it could be time to lose labels and make products gender neutral to hit potential. After all, what woman hasn’t grabbed 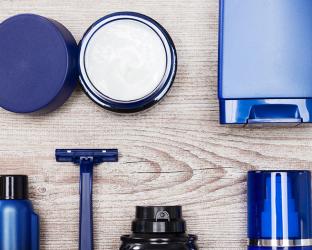 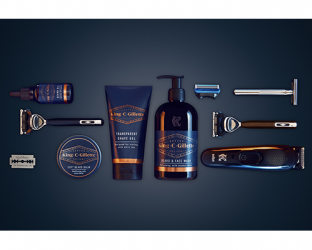 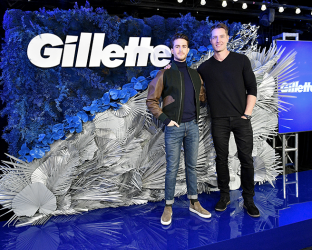 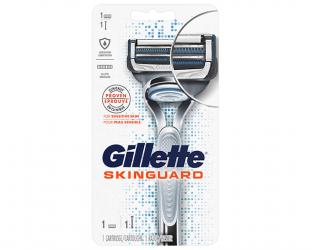 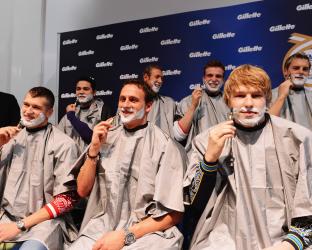