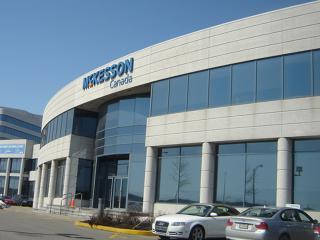 SAINT-LAURENT, Quebec - McKesson Canada on Tuesday opened its latest state-of-the-art pharmaceutical distribution center in Trenton, Ontario.
“We have invested over $73 million in our brand new modernized distribution center in Trenton," stated Alain Champagne, president McKesson Canada. "This site will become McKesson Canada’s most important regional base, servicing patients throughout Ontario,” he said. “Building this new facility was an important decision for us. Together with our employees, this site enables McKesson Canada to increase capacity and better respond to the evolving needs of health providers in Ontario while achieving greater operational efficiencies.”
The new facility features 500,000 square feet of warehouse space and 12,700 square feet of office space, which is approximately 25 times larger than its original building on Sidney Street and includes a staff of more than 200 employees. It is outfitted with a new automation system that helps increase the distribution center’s overall productivity and volume of orders.
“McKesson Canada’s new pharmaceutical distribution center is a huge economic boost for the city with the creation of new jobs that this facility brings to the community,” adde Jim Harrison, mayor, City of Quinte West (Trenton). “The city is pleased that McKesson Canada made such a substantial investment, by building one of the largest industrial facilities in the Quinte Region.”
Advertisement
Advertisement
Advertisement