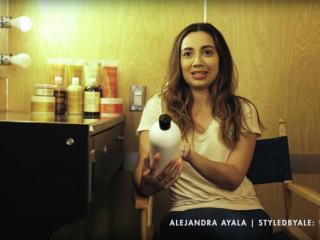 Shea Moisture is unleashing the second phase of its call-to-action program, #BreakTheWalls.

This time, the Sundial Brands-owned skin and hair line is challenging the concept of a one-size-fits all representation of beauty.

In a short film, 30-second spots and behind-the-scenes footage, prominent beauty vloggers, including Naptural85 and StyledByAle, and women who have made headlines for defending their hair in the workplace — such as Sargeant Jasmine Jacobs, who petitioned the U.S. military to change its policy banning natural hairstyles, and Rhonda Lee, a meteorologist who was fired from an ABC affiliate for responding to a comment about her natural hair — question what the term “normal hair” means.

“With our first iteration, we showed the physical walls coming down,” said Richelieu Dennis, founder and CEO of Sundial Brands. “With ‘What’s Normal?’ we are confronting the mental walls that encourage us to force-fit ourselves and others into falsely constructed beauty and ‘good hair’ ideals. Our forward track must focus on including everyone, embracing everyone and celebrating the beauty — and normalcy — of everyone’s differences.”

SheaMoisture worked with award-winning creative agency Droga5 to develop both the “Break The Walls” and “What’s Normal?” films, which celebrate the positive changes women are experiencing in the beauty industry, and are a rallying cry to join together to continue to reshape the beauty landscape — from a dated model of “standardized ideals” to one of inclusive representation at shelf and beyond.

“One of the most exciting and humbling aspects for us during the creation of ‘What’s Normal?’ was the continued chorus of courageous, confident, defiant and self-accepting women who shared their stories, their insecurities and their triumphs with us,” said Dennis. “They were so deeply poignant that we were compelled to, again, develop the script for the film using a compilation of sound bites taken from our cast members’ interviews. So, we are still telling her story through her eyes and with her voice.”

To complement “What’s Normal?,” Shea Moisture invested in the technology to build the first hair-recognition tool of its kind — “Good Hair Day” at www.AMillionWaysToShea.com. The “Good Hair Day” tool lets users upload a photo and answer hair questions to get “at-a-click” personalized recommendations to easily match their hair need with a specific product among the more than 150 hair items in Shea Moisture’s arsenal.

“We are constantly iterating on our approach to what are considered ‘industry’ standards and what we hold as ‘our’ standards — testing, learning and growing as we work to serve her better,” Dennis said. “Even when we’ve conducted limited-run label tests using ‘normal’ on our packaging, the results have shown an overwhelming preference for need state versus normal because of its exclusionary nature.” Retailers and even other brands have joined Sundial in its efforts to merchandise for a new general market, no longer defined only by ethnicity.

In support of What’s Normal, the Perception Institute — a consortium of social psychologists and strategists who use cutting-edge research on how our brains respond to differences in race, ethnicity and gender identify solutions that reduce bias and discrimination — has conducted a special hair study measuring the implicit biases linked to hair.

Hundreds of studies over the last two decades have confirmed that many people have implicit biases linked to race and gender that are rooted in pervasive societal stereotypes. Implicit bias affects how we perceive and treat others, sometimes in ways that have serious consequences.

To date, no one has examined implicit biases linked to hairstyles worn by black women, according to Sundial. Leveraging insights from and images provided by Shea Moisture’s hair and beauty experts, Perception Institute created the first-ever “Hair IAT” to measure whether implicit bias against black women’s natural hair exists, as well as to assess how the public feels about the beauty and professionalism of black women’s hairstyles. Findings from the study, which is based on a 4,000-person national sample, will be released in the coming months.