Sometimes, life’s agenda goes differently than you expect. Melanie Loftus knew she wanted to open a charitable pharmacy someday — perhaps in retirement. She didn’t anticipate how short that road would actually be.

In 2018, Loftus signed up to become a volunteer at the Hope Clinic of Ross County, a free faith-based clinic that provides medical and dental services to uninsured patients. At the time, she was living nearby, in Chillicothe, Ohio, working as a pharmacy manager at Sam’s Club.

During the onboarding process for Hope Clinic, Loftus mentioned that she’d always wanted to open a charitable pharmacy. “I did a rotation at one in pharmacy school and just fell in love with it,” she said. “This is what I want to do. It’ll probably be a long time from now,” she told them. 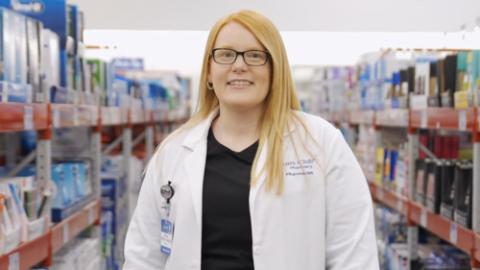 They needed something better, so Loftus was put in touch with a doctor at the clinic who she was told was interested in opening a charitable pharmacy but needed a pharmacist to make it happen. Loftus was that person.

After checking with her employer, Loftus returned to college to obtain a business degree. She used the skills she learned in school, which Walmart funded, to create a business plan for the new pharmacy. “The grant writing stuff was so intimidating to me,” she said. “But that really gave me the opportunity to kill two birds with one stone because I could work on the stuff that I would need in real life for school.”

[Read more: Funding the future: CVS’s Shea Manigo shares the reason she created a scholarship fund to honor her mother]

Loftus presented her plan to the board at Hope Clinic and received a unanimous vote to open the pharmacy. The next step would be to receive grants to make the dream a reality. “Because everything is volunteer-based and all grants and donations, I was thinking it would be many, many years before this was a real thing,” she said. “We got the funding in six months or something. It was insane.”

Just a year and a half after the idea for the pharmacy was formed, the Hope Pharmacy at the Hope Clinic opened in November 2021. They filled 37 prescriptions on its first night. Not too long ago, they filled 126. The pharmacy serves those making less than 300% of the federal poverty line or those who are uninsured or underinsured. Currently, the pharmacy is only open on Monday evenings.

“It’s just amazing to be able to be there for people in that time of need, even if it’s just for a short time.” — Melanie Loftus

Loftus said the Hope Pharmacy helps a lot of people who are in between jobs or who’ve recently lost their insurance coverage, similar to the charitable pharmacy where she did a rotation during pharmacy school. People would use the program for two or three months, until they had another job and new insurance, she said. “It was really a stepping stone, just getting them back up to where they were good again.”

Loftus, who has a 4-year-old son, said the road to opening the pharmacy was time-consuming but added that she’s getting better at time management. Overall, the experience has been rewarding.

“We’re only open one day a week, but people can call and leave messages,” she said. “Sometimes the messages aren’t like, ‘Hey, I need this refilled,’ or ‘Do you have this drug?’ They’re like, ‘I just wanted to call and tell you guys how helpful this has been.’ Just the stories that people tell you. It’s just amazing to be able to be there for people in that time of need, even if it’s just for a short time.”