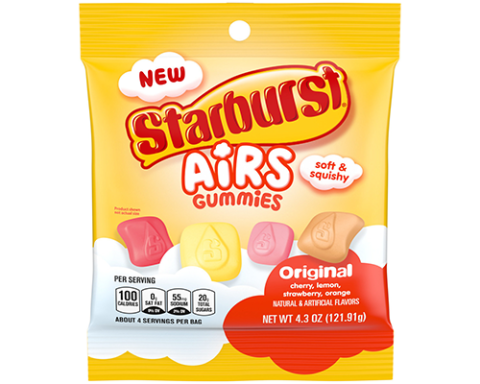 Mars Wrigley is shaking up the texture of its Starburst brand.

The Newark, N.J.-based company announced the latest innovation to the brand — Starburst Airs.

An aerated gummy candy, it features an inflated texture that results in a bouncy gummy that contains the traditional Starburst flavors.

“Starburst is delivering better moments and more smiles to gummi fans with our next generation aerated gummies — Starburst Airs,” Justin Hollyn-Taub, senior director of US fruit snacks for Mars Wrigley said. “Starburst Airs are reimagined gummies that will leave candy-lovers enamored with the combination of Starburst flavors in a pillow-like texture.”

Available in original flavors of strawberry, lemon, orange and cherry, as well as sour tropical varieties including sour kiwi, strawberry, pineapple, passion fruit and mango, both options will be available in 4.3-oz. bags.

Consumers can expect to find Starburst Airs on shelves at select retailers this fall, with nationwide availability beginning in 2022.