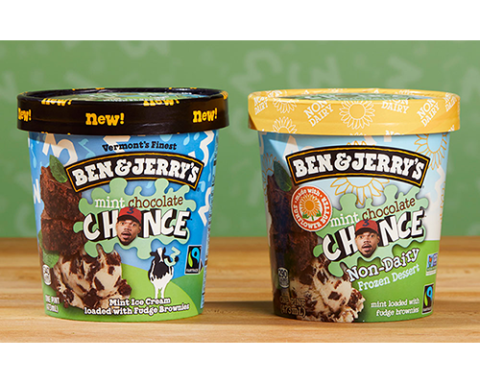 Ben & Jerry’s is taking a chance on Chancelor Johnathan Bennett, better known by his stage name Chance the Rapper.

Together, the two have partnered to create a brand-new ice cream flavor — Mint Chocolate Chance.

Available as both ice cream and a sunflower butter-based non-dairy dessert, Mint Chocolate Chance has a cool mint base with fudgy chocolate brownies.

Inspired by Chance’s own favorite creation growing up, he would add his mother’s brownies to mint ice cream, the company said.

“I’m so excited to have my own flavor of ice cream with Ben & Jerry’s. I grew up with their ice cream as a kid so getting to create a new flavor brought back a lot of great memories,” Chance said. “It amazes me that no one thought to combine brownies and mint chocolate chip and I can’t wait to share it with everyone.”

A percentage of proceeds sold from Mint Chocolate Chance will benefit the musician’s nonprofit SocialWorks, which aims to empower youth through the arts, education and civic engagement. The organization works on programming that focuses on education, mental health, homelessness and performing, and literacy arts.

“Chance the Rapper is a tremendous talent and inspiration,” said Ben & Jerry’s CEO Matthew McCarthy. “Through his flavor we hope to inspire creativity in the next generation and to spread the word about SocialWorks in a delicious way.”

Mint Chocolate Chance, available on shelves in the first quarter of 2022, will be a fulltime flavor set to retail from $4.99 to $5.49.