COVID-19 pandemic be damned. Men, just like women, still want to look good during a crisis. The question is whether they are buying grooming products in stores or online now.

Even as many men grew elaborate beards, let their hair grow long or allowed their skin to crack, a large portion of male consumers used the lockdown time to experiment with new looks and try some different products. Some had to look professional for Zoom meetings, while others simply got bored and started searching online, finding themselves watching instructional videos on how to update their quarantined lumbersexual style.

Yet, the pandemic definitely has played a role in where male shoppers go for these items. Retailers, many said, will have to work hard to get consumers to come back to their stores as the pandemic subsides. That holds true for the men’s grooming category, as well. 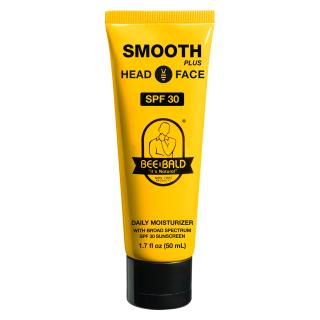 There are some good signs for retailers, though. Some said that the men’s grooming category at retail thrived when barbershops and hair salons closed temporarily, and the category is still gaining sales momentum. “The biggest trend right now is a leap in household penetration of our categories, up 20% in some cases,” said Steven Yde, vice president of marketing of North American consumer division at Wahl Clipper. “The shutdowns grew beards, and people had to learn to either grow their hair out or try to cut it themselves at home.”

Sterling, Ill.-based Wahl makes haircutting, trimming, shaving, and beard and hair care products, as well as pet grooming products and massagers. Demand for the products is currently up by double digits, Yde said, and early in the pandemic, demand was up in triple digits. The company has an instructional haircutting at-home page on its website, which saw a 300% increase in traffic in late March near the start of the pandemic. According to Wahl, people were cutting their own hair, as well as the hair of their family members, partly out of necessity, but also because the task was empowering, as learning a new skill can make a person feel like they have some control.

Watching how-to videos online is nothing new, but COVID-19 transformed certain tasks into do-it-yourself projects. “Millions of men who have been unable to get their hair cut or styled these past few months have opted to cut it themselves, or have a household member do it for them,” said Dennis Fisher, founder and CEO of Bee Bald. “What that has meant is very, very short hair or a shaved head, both of which have been terrific for Bee Bald.” 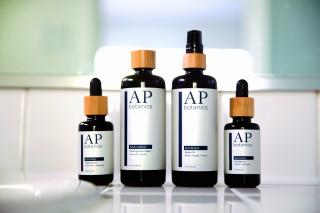 Yet, online shopping is making a difference, both in educating men about products and giving them more convenience. For example, during the first three months of the pandemic, sales of American Provenance products shifted from about 50/50 e-commerce and/or brick-and-mortar to 90% e-commerce, said founder Kyle LaFond. Meanwhile, the amount of time people spend in the store is down by two-thirds.

“If they were in the store for 45 minutes prior to COVID-19, now they are in for 15 minutes,” LaFond said. “Now, they’re just picking up essentials and not doing any browsing.” Blue Mounds, Wis.-based American Provenance, which makes natural deodorants, beard balm and hair pomade, recently launched the AP Botanicals line of skin care products.

On the bright side, LaFond said, consumers are buying online from the stores’ websites, where savvy retailers have an opportunity to reach out to these shoppers. Some already are engaging with them through social media, such as Facebook Live events and Instagram stories. “A lot of retailers are becoming more active with their own social media sites,” he said. “I’ve seen retailers hire digital media managers to have someone on staff be the point person for digital media.”

Another pandemic-related trend that is likely boosting the category is that consumers are not spending money on vacations, movies or, for the most part, dining out. Instead, they spent money on personal care.

The larger trend driving sales is consumers’ changing attitude about personal care items. “I think men are more receptive to hearing about and learning about grooming products than ever before,” LaFond said. “If you look at our online traffic, the comments and questions are coming from a broad swath of folks, not just hipsters and avant-garde, but men at the middle or end of their professional careers.” 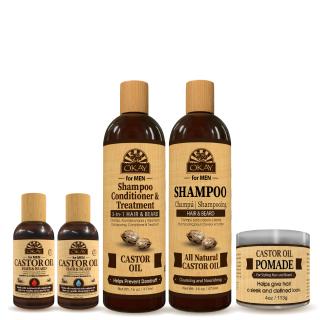 While all ages are buying the products, younger consumers are digital natives who can generate excitement for new products. “Millennials and Generation Z care about their appearance more than their predecessors because they are so active on social media and are recording videos and taking pictures daily,” said Osmani Mithavayani, co-founder of Okay Pure Naturals in Miami Gardens, Fla. “In the Instagram, Tinder, YouTube, Snapchat, TikTok and Facebook influencer-driven world, appearance matters.”

As with many other categories, shoppers are looking at what’s in the products. They want natural, organic, healthy ingredients that are ethically sourced and that do not harm animals or the environment. Okay Pure Naturals’ men’s personal care line includes All Natural Face & Body Wash, All Natural Face Hand Body Lotion and All Natural Hair & Beard Shampoo, as well as Hair & Beard Pomade and Hair & Beard Gel made with natural ingredients. “Men today want products that are specifically created for them and their grooming needs,” Mithavayani said. “The consumer wants products that are easy to use and give him the results he is looking for.”

As men incorporate more skin care into their grooming routines, they have certain expectations from the items they buy. “When it comes to grooming products, men are looking for three things,” said Melissa Zagozan, senior category development manager for wet shave and grooming at Edgewell Personal Care in Shelton, Conn. “They want products made specifically for them and for their skin, they want products that deliver results, and they want to align with brands that resonate with their beliefs and behaviors.”

These demands are true for men of varying ages. Younger men are more likely to have tried hair removal products with added skin care benefits. Zagozan, citing Mintel’s “US Shaving And Hair Removal Market Report” from April, said that almost half of men under the age of 55 reported having tried products personalized to their hair and skin type. They are not just urban hipsters though — they actually look more like suburban dads. The men’s grooming consumer is primarily 25 years old and older, earns more than $80,000 annually, and tends to be the head of the household for families of six or more.

“Among these men, given the global COVID pandemic, we are seeing accelerated trends that were already in motion before the pandemic, such as increased attention to self-care, a focus on the environment and shifts to online purchasing,” Zagozan said.

Whether it is due to quarantining or an extension of other trends, beard care is hotter than ever. Zagozan pointed to research from Spate that found online searches for beard trimmers grew 15% year over year, as did searches for beard clippers (+20.9%), beard shavers (+16.6%) and mustache trimmers (+16.3%). Zagozan said post-COVID, consumers will continue to show significant interest in DIY hair grooming solutions.

This demand for grooming products reflects a changing shopper.

Consumers are more educated about products, ingredients and lifestyles. They’re not using products that they grew up seeing, but what they researched and relate to on more personal levels.
Jack Savdie, vice president of New York-based Global Beauty Care.
Image 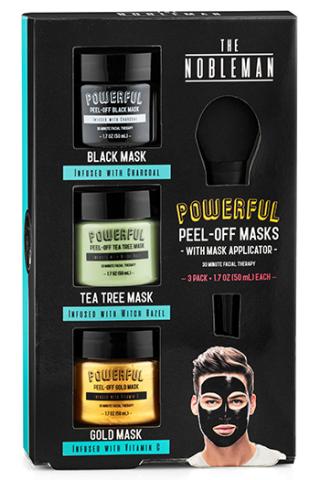 Savdie said that men want to look young, active and professional. They also want to make an effort without looking like they made an effort, and they want brands that have morals and values that align with their own. “They desire confidence and control over life,” he said. “They are willing to spend more on self-care products due to self-care awareness.” The company makes The Nobleman brand cleansing wipes, nose strips, facial cleansers and peel-off masks. The masks reflect the company’s ability to reach men without beards, as this is a target audience that has not gotten as much attention as men seeking beard care products.

Even Harry’s, which began as an online subscription service providing razors, acknowledged that men’s grooming is about more than the beard. “Guys are more interested in grooming and taking care of themselves than ever, and they’re also taking on a more active role in shopping decisions than they have in the past, driving significant growth in the men’s category,” said Michelle McKinney, director of omnichannel marketing and insights at New York City-based Harry’s. “As we’ve built Harry’s, it’s been exciting to see the idea of men’s care become widely accepted.” 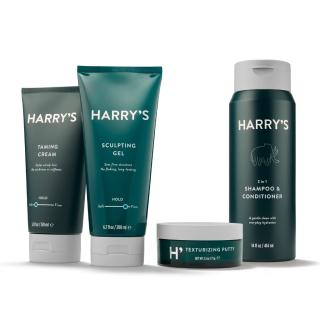 Over the years, the brand evolved its direct-to-consumer model, and the products now are available in Target and Walmart, as well as Walmart Canada in early 2020. “Today’s consumer wants to be met where they already are, whether that’s online, in store or via a subscription service,” McKinney said. “As a customer-centric brand, we want to be available however and wherever people want to find us.”

Harry’s launched products other than shaving items in June 2019, featuring a hair care line consisting of taming cream, texturizing putty, sculpting gel and 2-in-1 shampoo and conditioner. In February, Harry’s debuted a body scent, Redwood, available in both bar soap and body wash.

Offering a variety of products and brands makes sense in an environment where the shopper is evolving. “Today’s grooming shopper includes a wide range of men with various needs,” said Dawn Hedgepeth, general manager/vice president of deodorants, men’s grooming, hand and body lotion at Unilever in Englewood Cliffs, N.J. “From men who are engaging with grooming in a purely functional way, and buy products made specifically ‘for men,’ to those who are looking for a more elevated experience and are willing to use either male, female or unisex products based on what delivers superior benefits, there is no singular profile of today’s grooming shopper.”

Unilever’s portfolio of brands includes AXE, Dove Men+Care, Degree Deodorant and others. Not only are men looking for natural or natural-inspired grooming products, but in traditional categories like deodorant and body wash, the company has seen growth coming from new formats like dry-spray antiperspirants and foaming body washes. “We are also seeing men paying a lot more attention to their hair, whether it’s on their head or on their face,” Hedgepeth said.

Young men especially like to experiment with different looks, which has driven growth in hair styling products and beard care over the past few years.
Dawn Hedgepeth, general manager/vice president of deodorants, men’s grooming, hand and body lotion at Unilever.

The category will continue to evolve in the future. “The men’s grooming category is going to become much less gender-focused as consumers continue to respond more to skincare-first and ingredient-centric approaches, rather than the ‘for men’ marketing that has dominated the category for decades,” said  Stan Ades, CEO and co-founder of Pacific Shaving Company. “I also believe that brands’ ethos and integrity will play an increasingly important role in consumers’ purchasing decisions. Future success in this category will require retailers to continue to make these aisles destinations by drawing customers in for new and innovative products.”