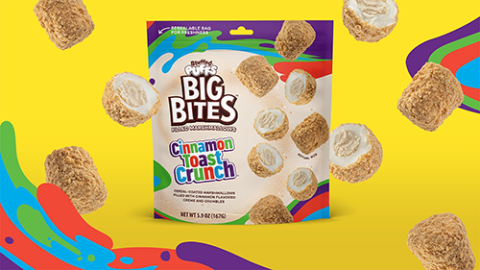 Stuffed Puffs is adding a cinnamon cereal-coated twist to its signature marshmallow snacks.

Each fluffy marshmallow is filled with real Cinnamon Toast Crunch crème and blasted with cereal crumbles, the company said.

“We are thrilled to partner with such an innovative brand that has completely reinvented what it means to be a marshmallow,” said Mindy Murray, General Mills, senior marketing communications manager. “Bringing Cinnamon Toast Crunch into such a fun and delicious sweet treat is an exciting expansion of our brand and for our consumers.”