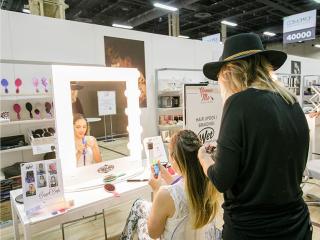 Cosmoprof North America, or CPNA, delivered a robust beauty trade fair featuring resources for every aspect of business, from packaging and filling to finished product. The event, held July 9 to July 12 in Las Vegas at the Mandalay Bay Convention Center, grew this year in both attendance and square footage, which can be attributed to expansion in such specialized areas as scent, natural products and multicultural items, not to mention a multitude of country pavilions — with Korean beauty holding court in two areas.

“Two years ago, some said it would be difficult to grow, but in reality it is exactly what we have done,” said Roberto Kerkoc, VP of Bologna Fiere Group, which organizes all the events of the Cosmoprof Worldwide network.

Despite the potential to feature more exhibitors by moving to another venue, Kerkoc said currently that isn’t a concern.

“Our mission is not to sell square footage. It is to sell an experience,” Kerkoc said, adding that moving halls would likely jeopardize the high-end experience offered at the current property. That experience includes some of beauty’s most sought-after buyers, including HSN, Barneys New York, Kohl’s, Dermstore, Amazon and QVC, the latter of which will feature a special show in 2018 based on CPNA discoveries.

Not to miss out on the power of social media, CPNA increased the span of its popular influencer programs and recruited 17 highly connected beauty influencers to engage with exhibitors on the show floor, specifically in the designated Beauty-E Zone, where brands could seek their advice.

Indie beauty brands perhaps had the most to realize at CPNA, with many business solutions offered to them during the three-day event. Educational sessions took center stage, with topics ranging from “How to Market to Millennials” and “Best Tech Practices to Connect with Beauty Consumers” to “How to Take Your Business to the Next Level with Financial Investment.”

And Cosmoprof delivered the best in beauty products. Here are the top five products and companies Drug Store News saw at the show.

Saryna Key
From the founder of uber-famous Moroccan Oil hair care brand comes Saryna Key, a line that’s positioning itself against its hero ingredient, shea butter, which the company is importing from Africa to Israel, where the product is ultimately made. Sold in 11 countries worldwide and with limited distribution in smaller U.S. markets, Saryna Key is making its big push in the United States this year. Four lines comprise the brand, including Damage Repair, Curl Control, Volume Lift and Color Lasting, each containing a shampoo, conditioner, spray gloss, shea oil and leave-in moisturizer.

Skin79
Deep in the heart of the Korean pavilion was Skin79, a K-beauty company offering beauty products for every price point and consumer. For millennials — and even younger beauty consumers — Skin79 featured animal-shaped fruit acid masks based on popular Snapchat filters. A face mask resembling a panda, a cat, a monkey and a mouse looked to be effective and instantly Instagram-ready.

Derma Pure Clinic Skin Iron
The Skin Iron, also found in the Korean pavilion, was designed to stimulate skin with microcurrents, sound wave vibration and heat. This all-in-one beauty device can be used for double chin lifting, nasolabial fold improvement and smoothing out facial contours. The device heats to 107 degrees Fahrenheit, too.

Zoya Art of Beauty
This family-owned and operated nail color brand now boasts 40% of its business internationally, with the balance generated in the United States through more than 6,200 salons, as well as Ulta Beauty stores. Launched in 1993 as a salon in Cleveland, Ohio, the company is being eyed by investors, but the family remains firm in its indie roots. Zoya recently bought an 80,000-sq.-ft. facility, in which it manufactures, fills and houses a creative studio for its 10-free formulas. A host of items are due for the second half of the year, including six new lip shades; duo, trio and quad-nail gift sets; and a hyaluronic acid-based hand lotion.
Advertisement
Advertisement
Advertisement